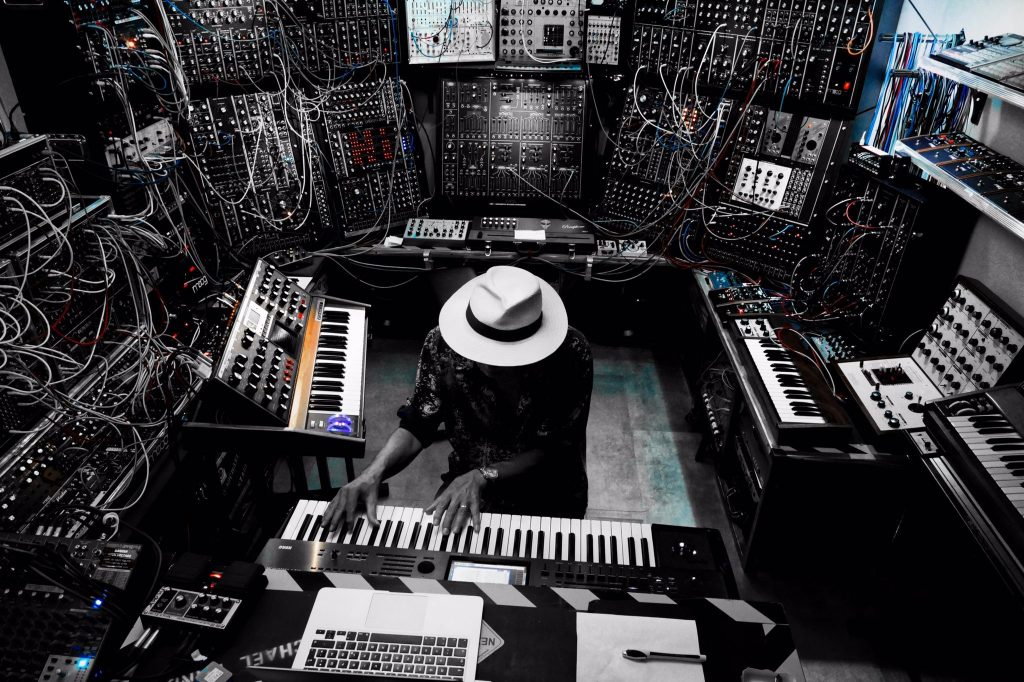 Zeus B. Held is a German music legend producer and musician, best known for his work with several leading artists of the Krautrock, Disco and New Wave era. Besides being an experienced producer and soundcreator/designer with his musical education on piano and reed instruments he is also a very well-respected arranger having spent 6 years as the keyboard player and multi-instrumentalist with the German group “Birth Control” (recording in total 6 albums).

After writing and producing the groundbreaking album by Gina X Performance “Nice Mover”, (followed by three more Gina X albums), his first UK production credits were with Fashion and Dead or Alive, he produced Pete Wylie’s “Sinful” album and the hit album by Men Without Hats which yielded a number one in many European countries and a US Top 20 hit with “Pop Goes The World”. This was followed by 2 hugely successful hit albums (including a #1) and numerous top ten hit singles with British group Transvision Vamp.

2015 was a great year for Zeus his newest project came in his new studio album “Logic of Coincidence” released on Les Disques du Crepuscule.

Recorded chiefly in Japan and Germany, Logic of Coincidence is experimental yet highly melodic. Luke Rhinehart provides the spoken narrative on two tracks, The Glass Bead Dice Man and Surrender Your Soul.

The album closes with a remix of “Kant Can Dance” by Dream Control, the new Zeus B. Held project with former Tangerine Dream member Steve Schroyder.

This is how a spontaneous project came about – long overdue! A colourful bouquet of ideas, rhythms, sounds, images and stories … They met in 1973 at a Krautrock Festival in Frankfurt – Mani played and was Guru Guru, Zeus was the newcomer to Birth Control on the keyboards. Since then they have met again and again, jammed and played gigs together. Then finally – in the summer of 2019 they went two days to Bernie Michael Land’s Synxxs Studio in Rodgau – a wall of modular synth and wonderful gongs and percussion – this is how the basics of the tracks with Mani’s percussive playing on the “Haken Continuum” and various electronic drum pads came about. Zeus built the chord structures and sequences for this. Then it went to Zeus’ KG Beat Studio in Freiburg, where Mani recorded an acoustic drum kit as an overdub. There were also some outbreaks of poetics – so for some pieces texts were created about the common sound images. Afterwards they started again in Mani’s Odenwald Secret Retreat.

“Discreetly, almost secretly we’ve been putting together a first album – after we’ve known each other as musicians since a long time …”

A Beginner’s Guide to Zeus B Held

TV AND FILM WORK
His original music has been used in Films and for Major TV campaigns and commercials some of which include: Mad Dogs, C&A, Swatch, Audi, Rowntree, Marbles, Direct Line, Weightwatchers and Africa Aid.

2016 NEW LOOK CAMPAIGN for the Autumn and Winter campaign.